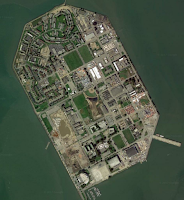 Using Openlayers Plugin, we can add free satellite imagery layer from Google or Bing. But before using this plugin, we have to make sure the plugin is already installed into QGIS software. To check if it  already installed or not, can be done in the following way.
1. In the menu Plugins, select Manage and Install Plugins...(See figure 1).

2. Plugins window appears as in figure 2. In the left panel select Installed. If Openlayers plugin already installed, it will appear in the right panel. If not, select All and type Openlayers in Search toolbar (see figure 2). The Openlayers plugin will show up. Select it and click Install plugin button in the right bottom window. When installation finish, close the window.

Update: Openlayers plugin is not available anymore in QGIS 3. To add satellite imagery layer in QGIS 3 can be used XYZ layer or using Tile+ Plugin.

How to Check the Date of Google Satellite Imagery

There is no direct way in QGIS to check the google satellite imagery date. But we can use google earth to do it. Open Google Earth, zoom in to the place of imagery you want to check, the imagery date can be seen at the bottom of google earth as in figure 6.

The second way to add satellite imagery as a layer in QGIS is using ESRI World Imagery, which is provided in ESRI ArcGIS online. It serves as ArcGIS REST API service. To add the service can be used a tool called Add ArcGIS Map Server Layer. The tool can found at menu Layer >>  Add Layer >> Add ArcGIS Map Server Layer... as in figure 7. The satellite imagery from ESRI can be seen as in figure 8. The date of satellite imagery can be checked using Identify feature tool in QGIS. See how to use ArcGIS REST API Service for complete tutorial.